We all need a little clarity in our lives.

This hundred miles began to feel more like home as I reentered the land of Kroger stores and Cracker Barrels waiting for me in trail towns.  As the last hundred ended, so this hundred began…chilly, rainy, foggy gloom for several more days, eventually totaling twelve days out of thirteen.  Hiking in such dismal conditions definitely takes its toll on one’s spirit yet also works to increase efficiency as there’s nothing to do but put your head down and pummel through it.  My record day of twenty-nine miles came the day before Hurricane Joaquin brought flooding monsoons to Virginia.  It was a race to town! Three unplanned zero days later, I went from a cozy warm hostel where I finally met a group of southbound thru-hiker friends to a flooded river of a trail.  Water was ankle deep for miles and streams were transformed into Maine-like river fords.  Feet stayed wet for days on end, and springs thundered so loudly underfoot their sound was overpowering. Beautiful waterfalls were everywhere, in places where usually there is no water at all.  The trail was an obstacle course of fallen trees and limbs. Unpleasant would sum up the conditions those first few days after the storm.  However, even within the melancholy, there were moments that left me awestruck!  There was another bear, the fourth in Shenandoah National Park and the eighth total, who ran across the trail fifteen feet in front of me!  Even more significant were the minutes spent with a menagerie of deer, getting within arms reach of a buck who never ran, but allowed me to pass right by him. Juicy, fresh apples found occasionally on trees overhanging the trail provide the mouth and body with needed refreshment (fresh fruit is the best trail magic!).  Random acts of kindness from a stranger in the form of my own hotel room at Big Meadows Lodge after a punishing day in the Shendandoah’s regenerated not only my spirit, but some physical exhaustion and pain as well. It also slowed me down enough to allow my fellow flip-flop hiker friend to catch up with me and turned a pretty crappy day into one of my favorite days on trail, providing just the uplifting I needed to keep walking another day!  The rain, through all of its misery, brought me into a new circle of hiker friends, allowed me free time to snuggle up and read an entire novel, enjoy some inspiring live music surrounded by quite an entertaining staff at Big Meadows, and reunite with a hiker friend from the past who will likely be along for the duration of my southbound journey home! 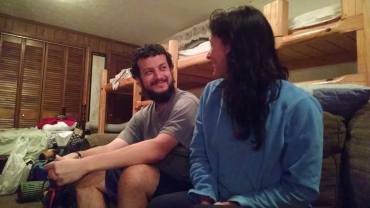 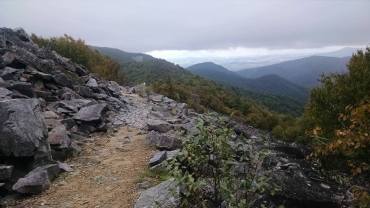 Notable moments this hundred miles included my first taste of Mexican food in four months!  Though it required a mile long walk in the rain, a group of friends and the promise of lunchtime food and drink specials made it worth every step.  Also along the trail this section was the Devil’s Backbone Brewery which caters to hikers by allowing free camping on their acres of beautiful grounds and a delightfully delicious $5 hiker breakfast.  My new found friends and I gathered there for an evening of trail chat, refreshing drinks, and rejuvenating meal options that sure as heck beat dehydrated food and Ramen noodles. In addition, my four month “trailversary” brought the first day of radiant, blissful sunshine to our trail!  Everyone’s mood immediately improved and the trail became the familiarly beautiful AT, a canoe no longer needed.  On the last day of this hundred, just after I crossed over the 1,400 mile mark, at the summit of Punchbowl Mountain in the absolute middle of nowhere, I found a new purpose to inspire me to keep plugging along farther than planned.  This purpose came to be named “Roger Nugget”, a sick puppy who was stranded on top of Punchbowl Mountain. There was no water for miles, and this little guy was feeling it.  He was extremely lethargic and couldn’t walk more than a few stumbling steps before plopping back down to the ground.  Putting mind over matter to the test, a friend and I took turns carrying this 12-pound canine in our arms for miles, adding to our already heavy load and increasing the difficulty of our ten mile task tenfold.  When at the point of our bodies giving out, we happen upon a couple of other hikers who join in the effort and between the four of us, we carry the little guy over ups and downs (mostly down, thank goodness!), across ten miles of terrain, through an angry, stinging swarm of yellow jackets, to safety.  After a night at the vet recovering from severe dehydration and exhaustion, he’s reported to be much spunkier and in good health and will be up for adoption on October 13!

Walking for Mexican and margaritas!

Stranded on top of a mountain