We all need a little clarity in our lives.

On the A.T., expect the unexpected.

Ascending the very dry Bluff Mountain in Virginia on an unusually warm day in early October meant lugging three heavy liters of water and drinking conservatively as the next easy access to water was a whopping ten miles away.  Celebrating having just crossed over my 1,400 mile mark, at the summit of 3,372 foot Bluff Mountain in Virginia, in the absolute middle of nowhere, I found a new purpose…a reminder that I was exactly where the universe wanted to me to be.  After a few minutes relaxing on a perfectly placed boulder gazing at the picturesque countryside below, a trail friend, “Gravity”, joined me at the summit.  We chatted for a few minutes while I readied myself to begin the undulating descent to the base of the mountain. We said goodbye and I sauntered off.  Or so I thought. Suddenly, no more than 20 steps into my descent, I stumbled upon this:

This new purpose came to be trail named “Roger Nugget”, a sick puppy who was stranded on top of Bluff Mountain. There were no roads or homes or water for miles, and this little guy was feeling it.  Gravity and I attempted to attach a length of rope to his collar as a leash. This would have worked fine except that our new cause was in bad shape.  He was extremely lethargic and couldn’t walk more than a few stumbling steps before plopping back down to the ground.  Time to move on to plan B.

Putting mind over matter to the test, Gravity and I took turns carrying this 12-pound patient in our arms for miles, adding to our already heavy load and increasing the difficulty of our ten mile task tenfold.  What began as 20-minute shifts soon dwindled down to 5 minutes at a time.  We were utterly spent after five miles of carrying this fella plus our packs across rocky mountain terrain. When at the point of our bodies giving out, we happened upon a couple of other hikers, Brew and Jersey, who joined in the effort. Between the four of us, we carried the little guy over ups and downs (mostly down, thank goodness!), across five additional miles of trail, through an angry, stinging swarm of yellow jackets, to safety.  Brew constructed a sling with his jacket, and while carrying “Roger Nugget”, fell head over heels in love with the sweet puppy who was putting his full trust in us to save him. 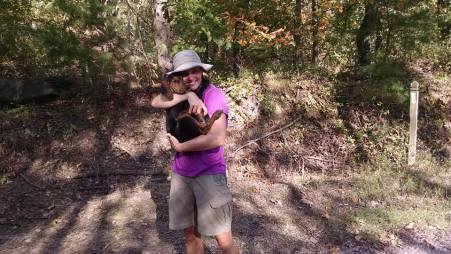 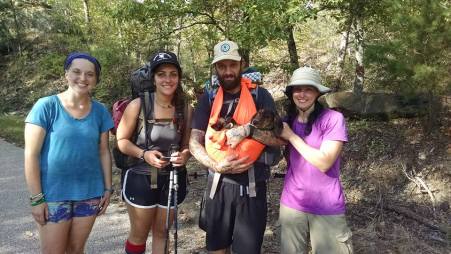 Animal Control met us at the trailhead and took the puppy straight to a veterinarian to get checked out after such a traumatic ordeal. After a night at the vet recovering from severe dehydration and exhaustion, he was reported to feel much better, and Brew started the adoption process. He had bonded with the pup and given him the permanent name, “Ottie”, since he was discovered near the Ottie Cline Powell monument on Bluff Mountain.

I am sure you’re wondering how Ottie is now.  Decide for yourself. 😉 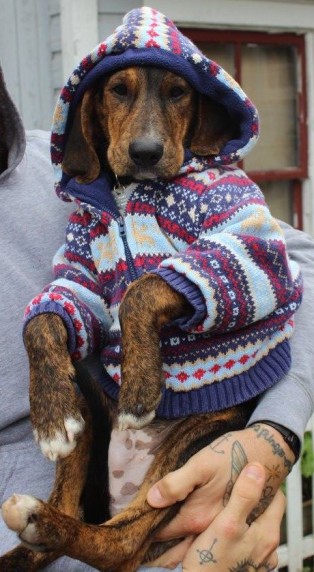 Clarity is discovered when purpose is identified.  You have a purpose for being where you are in this life. Things happen the way they’re supposed to, even when times are inexplicably dark. Get away from the world a bit, explore the outdoors, do something you’ve never done before.  Find your clarity.  You only get one shot at this lifetime and eventually (sometimes suddenly), we all run out of tomorrows.

**Check out my “Ask me anything” on reddit.com going on now! twistwrist99

8 thoughts on “A Four-Legged Surprise”